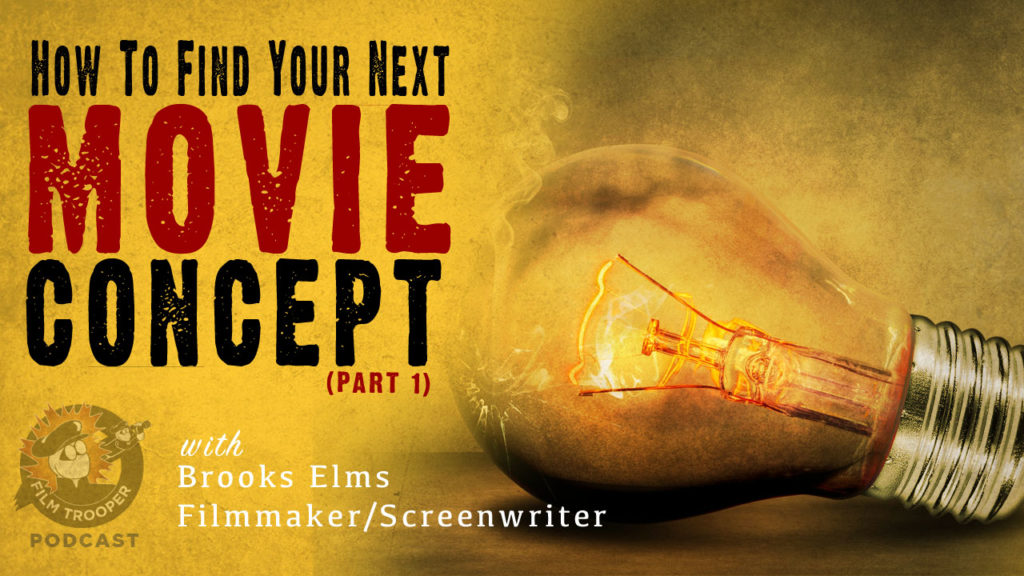 [Podcast] How To Find Your Next Movie Concept (Part 1)

In this episode, returning guest, Brooks Elms, who is a filmmaker and screenwriter is here to take us through the process of finding a movie concept that speaks to you and your audience.

Name 5 of your favorite movies ...

As you'll hear in this podcast episode, Brooks Elms, asks me to name 5 of my favorite movies.

What are 5 of your favorite movies?

What makes the concepts of your films unique?

After naming your 5 favorite films and analyzing why you love them and what makes them unique ...

Or I should say, what is the concept within your favorite films that make you love them?

Name 3 films within your genre ...

Most likely, not all your favorite films fall under the same genre.

So, whatever genre your next script will be in, it's time to name 3 films that most closely relate in tone.

For me, since I'm writing a paranormal thriller, I chose:

After listing and analyzing why you love the films you love, it should help get your creative juices flowing.

The idea is to brainstorm as many "concepts" as possible.

Here are my crude examples, as you'll see it's just designed to get the ball rolling ...

Concept 01:
An angel must prevent a living person from being killed; that person being her former self.
Concept 02:
A vengeful spirit attempts to possess a young girl, only to discover that she is protected by her dead twin sister's soul.
Concept 03:
A young girl who suffers from Nyctophobia (fear of the dark) must fight off a demonic spirit who only attacks in the dark.
Concept 04:
An asthmatic young girl, alone in the house, must connect with her dead twin sister's soul to help fight off a vengeful spirit before it possesses her.
Concept 05:
A troubled young boy witnesses the murder of his older sister by the hands of a vengeful spirit.  Discovering that the evil entity has cursed him to die in one week’s time, the boy must enlist a group of misfitted paranormal enthusiasts, to help him enter the otherworld to save his sister’s soul and his own.

What are your concepts?

Hopefully you'll get a lot out of this episode and it helps in your writing process.

Get more from Brooks Elms at: