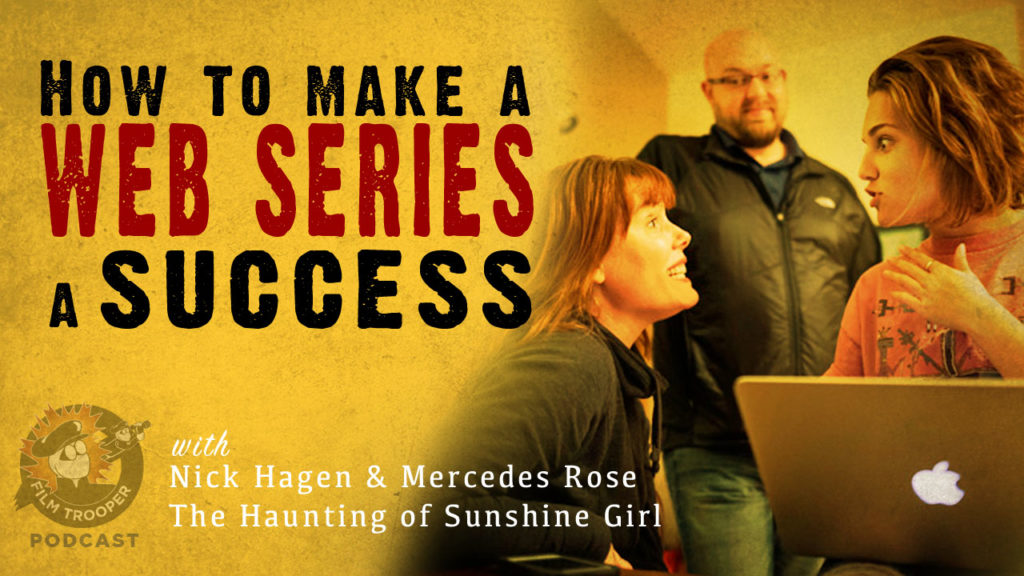 [Podcast] How to Make a Web Series a Success

In this episode, we discover how to make a web series a success.  Nick Hagen and Mercedes Rose, Co-Creators of Haunting of Sunshine Girl, share the secrets on how they turned their hit YouTube web series into a book series and a TV series.

How to make a web series a success ...

Before we delve into this topic, let's define "success".  Would you consider having your web series picked up by the Weinstein Company and turned into a New York Times Best Selling book series a success?

Would you consider your web series being turned into a TV show a success?

Would you consider having Disney Studios pay you to make another web show for them a success?

If so, then we can agree that those opportunities would be considered a success.

And that's what happened to the team behind the hit YouTube series, "The Haunting of Sunshine Girl".

The Haunting of Sunshine Girl is an ongoing supernatural horror web series that is currently broadcast on YouTube.  The series was created by Paige McKenzie (who plays the title character, Sunshine), Nick Hagen, and Mercedes Rose (Paige's mother on and off screen), and is produced by Coat Tale Productions.

The series first launched in 2010 and its premiere episode was uploaded on December 10, 2010. The Haunting of Sunshine Girl quickly rose in popularity and between December 2010 to October 2011 the show received more than 4.3 million total hits.

The average length of the episodes is about two minutes but can run less depending on the episode and content. (Source:  Wikipedia)

As you'll hear in this podcast episode, filmmaker, Nick Hagen had been working at a screen printing company handling their online marketing campaigns.

While working on a pilot for a spoof ghost hunter type show, Nick met Mercedes, who was one of the actors in the pilot.

Nick quickly recognized that Mercedes had the same drive and sensibility to the world of "movie business" as he did.  Knowing that Mercedes had a teenage daughter, Nick proposed an idea to start a YouTube web series based on the keyword "haunts" or "ghosts" ... but do so with a teenage girl.

Thinking that if Mercedes's daughter was anything like her mother, Nick couldn't go wrong.  Enter Paige McKenzie.

After meeting with Nick Hagen, Paige and her mother, Mercedes decided to partner up to create and launch The Haunting of Sunshine Girl to the world. 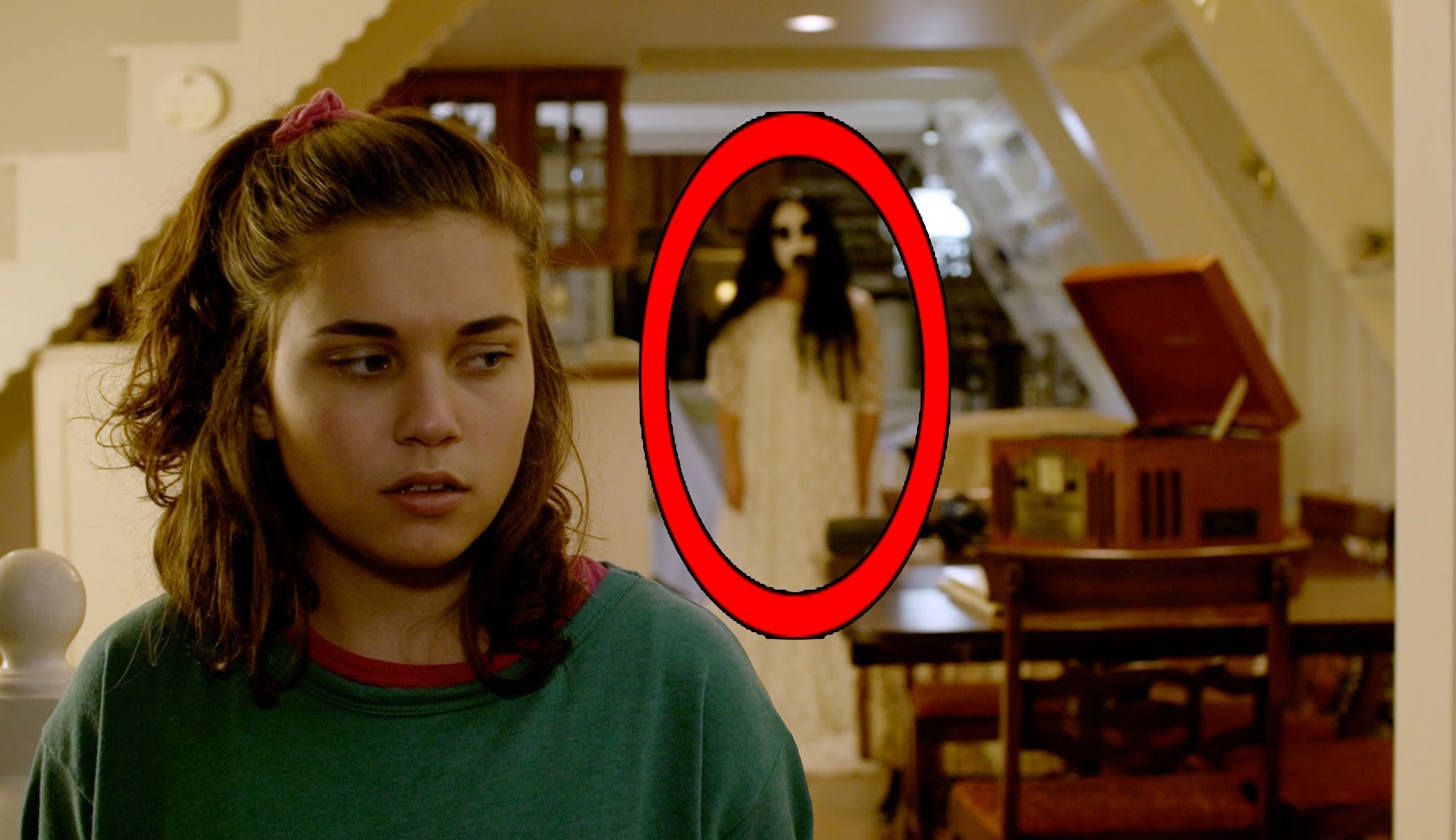 As you'll hear in this podcast interview, both Nick and Mercedes will tell you how deliberate they were with their plans for the series.

It wasn't one of those, "Let's mess around and see what happens" type of things.  It was much more, "Let's build an audience around our show and then take what we've built to see if we can get anyone in Hollywood to notice."

Nick was inspired by an article he read about Tyler Perry, who had built a traveling theater company which eventually turned into films and into the mega-empire of films and TV shows outside of the Hollywood system.

The key takeaway for Nick was "build your own audience".

As you just read, Nick and Mercedes were keen on "if they could build a large enough audience on their own, then maybe someone in Hollywood would notice."

Many filmmakers want to know "how do you build an audience"?

One of the first things Nick did was do an analytical search on YouTube to discover that there were a ton of searches for the keywords "ghost" and "haunting".

In business and marketing, this is described as defining the market.

They defined a market that was hungry for ghost and haunting videos.  The team of Hagen, Rose, and McKenzie worked hard to develop a creative narrative that could be told on an ongoing basis with short video clips.

The Sunshine team made the decision to produce volume.  They would make a lot of short videos that were uploaded on a consistent basis.

The Haunting of Sunshine Girl was launched at the end of 2010.  It took nearly 6 years before they landed any big breaks.  You'll have to ask yourself, "Is the web series I'm creating something that I can sustain for the next 10 years?"

In the podcast episode, you'll hear how Nick had to quit his job to focus full-time on the production of Sunshine.

Times were lean for the team.  This was a huge commitment and belief in what they were building.

You must ask yourself if you have that kind of dedication and commitment?

The Sunshine team stayed focused and continued to produce one video after another ... But they did so economically.  Although Nick had the equipment and skill set to produce beautiful looking images, he knew it wouldn't work for what they were producing.

Many filmmakers are trying to launch web series that look like television series.  They want to show off their production expertise ... but they are forgetting the cardinal rule of what brews success.

By scaling back production they could focus on producing volumes of content and watch as their subscriber numbers grew.

They were utilizing "resource filmmaking" at it's fullest.  Like Robert Rodriguez had done decades before in his debut feature film, "El Mariachi" ... He had a turtle, a bus, and a small Mexican town.  That's what he used to make his film.

The Sunshine team apply the same principles, at the same time keeping the main focus of audience building at the forefront.

Once they had amassed a large enough audience, they went shopping.  The Sunshine team made trips to Los Angeles and arranged meetings to see if they could leverage the value of their audience to take their brand to the next level.

You'll hear in the interview, how a meeting with Awesomeness TV led to an opportunity to enter a contest for Seventeen Magazine.  Paige McKenzie entered the contest and was one of the 5 finalists!

The opportunity to share the experience with her YouTube following created energy and put things into motion.

Step 6: Be ready for the opportunity

The Sunshine team had spent the first 3 years building an audience, but over the course of the next 3 years, they needed to nurture and take advantage of any opportunity that came their way.

After being featured in Seventeen Magazine, Paige got a call from a literary agent wondering if they ever thought about writing a book about being a YouTuber.

That didn't interest Paige, or Mercedes, or Nick ... But writing a series of books around the stories of The Haunting of Sunshine Girl did!

Remember, the team knew that wanted to build the brand.

What better way than writing a book series of all the stories they have been amassing since producing volumes of videos.

Be ready for the opportunity ...

The literary agent had access and leverage to shop the book idea around.  In the nth hour, an offer came on the table.

It was the Weinstein Company.

They weren't big players in the book world, but since Nick and Mercedes were film people, they knew this was the deal they wanted.

After meeting with the Weinstein Company, the Sunshine team came away with a book and television deal.  That's what I would call making a web series a success.

At the time of publishing this podcast episode and writing this article, the third book in the series is about to be released on April 4th, 2017.

You can pre-order it now through Amazon at this link:  The Sacrifice of Sunshine Girl

When you look back at the steps that were taken to make their web series a success, it's almost simple, in a way.  Not easy, but simple.

Who knows?  Independent web series with a large enough audience may be the practice league for new TV shows that Netflix and Amazon will buy.  And your web series could be next.

Let me know if you found value in this episode by leaving a comment below.

Meet The Haunting of Sunshine Girl Team in Person!

If you're in the Portland, Oregon area on April 5th, the lovely and talented, Paige McKenzie will be doing a live signing of her third book, The Sacrifice of Sunshine Girl at Powell's Book Store.