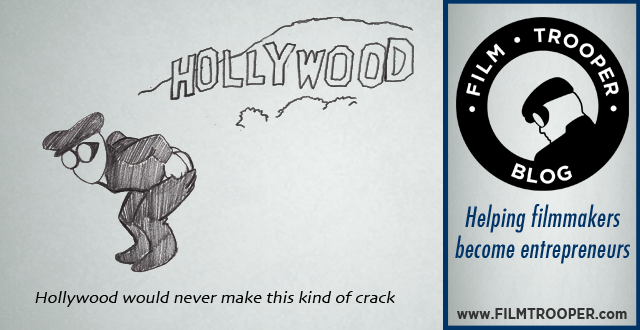 We have a gluttony of film products hitting the market everyday. In business speak, there is just too much damn “supply”. So, how does an independent film rise above the noise?

Okay, so how can we as independent filmmakers make some noise?

Here are my 5 tips at making your independent film more viable in today’s market place.

Hollywood must appeal to the widest audience possible. They have the resources to pump out the formulaic genres of the rom-com, action flick, etc. So, if you have one of those types of films and don’t have the resources to make it bigger or better, then don’t make one. If you don’t have stars to fill out your rom-com and if your story isn’t anything different than what Hollywood can offer, then don’t make it.

What makes independent film so glorious is the fact that we can tackle story lines that Hollywood can’t and will not make. So make something daring and original that challenges the status quo. Easier said than done, right? Well, let’s see how we can get there.

2. THE MORE SPECIFIC YOU ARE, THE MORE UNIVERSAL YOU WILL BECOME

Philip Rosenthal, creator of the hit TV show, Everybody Loves Raymond, described that the more specific they made their show, the more universal the emotional message became. Audiences are extremely savvy, and know when someone or some film is being inauthentic. The reason social media is blowing up for entrepreneurs and small businesses, is because they are able to show off their authenticity and show off that they are indeed real people. This is why big corporations cannot compete in the social media sphere. Customers can tell when they are being sold to and there is something inauthentic and cheesy when a big corporation tries to come off as being real.

The more specific you can make your film, the more authentic your emotional message will be for your audience. Bill Cosby is famous for saying, “I don’t know the key to success, but the key to failure is trying to please everybody.” So, what we can learn from this? Don’t make everyone happy with your film. Be specific.

3. WHAT VALUE DOES YOUR FILM OFFER YOUR AUDIENCE

Now that you’re specific about what your film is, let’s narrow it down even more. What value does your film offer your very specific audience? This is called narrowing down your niche.

But to ask yourself about the value you offer, it will really help you focus on your audience and not on yourself, or your self glory. You’ll realize that you’ll need to harness your talents to give your audience a gift … but it better be of great value.

This is why documentaries have done so well in the independent film market. They usually offer a very specific audience a very specific value. Genres films are harder to succeed, because like the #1 point states: MAKE A FILM HOLLYWOOD CAN’T MAKE. If you’re making a film that Hollywood can make bigger and better … then you aren’t offering a specific audience any more value than what Hollywood can do better.

4. MAKE YOUR FILM FOR CHEAP

In basic business speak, it’s about “supply” and “demand”. There is just way too much supply out in the marketplace when it comes to film products. So why would you make a film that costs so much to make?

Vimeo recently announced that they would offer a $10,000 advanced for films who distribute their films on Vimeo On Demand exclusively for the first 2 years. Now this offer was made only for films acquired at the Toronto International Film Festival.

Can this be done? A film made for so little? I made a film for $500 with no crew. Yes, no crew. You can read more about it at this link.

I know it sounds lame, but most likely, you’ll be stuck with this film project for several years, so it’s better be something you’re willing to sleep with for a very long time. I originally tried to get some film projects developed by reverse engineering what the buyers at the film markets would want to buy. I dictated all my decisions off this notion. But as an artist, I wasn’t happy.

Passion is not a joke.

You really must have passion and desire to create a project from scratch and to see it all the way to the end. So, beyond all these tips I’ve recommended, it still comes down to this very basic notion of “loving what you do.”

Do what you love.

You are free to make what Hollywood will not make.

Be inspired. Make something great. Don’t you love it when you see a film that just inspires you to make your own film? I would love to see what you will make and how many people you inspire.

Talk to me. Let me know if I’m off base with my tips, but if you’re gonna be mean about it, then just know I cry easy. I cry every time I watch the film, Rudy.

If you want to get started on your own film, grab yourself a FREE GEAR GUIDE on all the equipment that I used to make a feature film with no crew.

Thanks for being a trooper … I mean, a Film Trooper, and reading along.