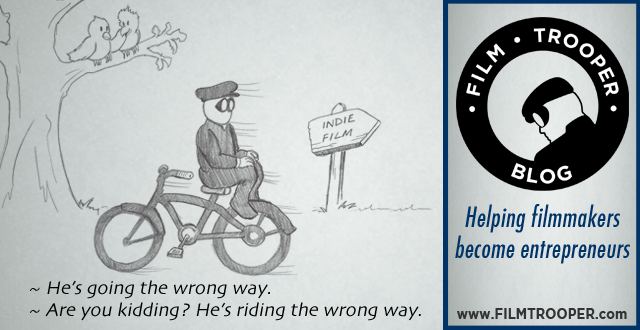 A person who takes an opposite or different position or attitude from other people.

There’s a saying in the world of stocks: “Buy low, sell high” … or even better, “Buy when there’s blood in the street”.

So, how can we apply this to independent filmmaking?  How can we do the opposite of what everyone else might be talking about?

What is an independent film?

Is it a film that is made entirely outside of the major studio system?  What is that system?

According to The Studio System News in their article THE STUDIO INDIE LIST, the definition of films made outside of the major studio system might surprise you.

The Most Successful Independent Film of All Time?

You know, George Lucas utilized his Lucasfilm company to fund his Star Wars films (except ,of course, for A New Hope in 1977) and used 20th Century Fox as the distribution company.  So, it could be said that his films are the most successful independent films in history.  Maybe?

Now, I think most of us regular Joe filmmakers think of an independent film as some dude picking up a camera, getting his friends together and just making a film.  Such as Clerks, Paranormal Activity, or The Blair Witch Project.  These are always the examples we use as a reference point for the hometown filmmaker breaking in.  But again, all these films still needed major studio distribution to be recognized.

These war heroes of independent cinema share their stories and give us advice on what war wounds we will endure when we attempt to make our independent films.  These are the producers who have endured the treacherous waters of the independent film landscape and have tangible proof that they have succeeded in the indie film space.

Are these the types of independent films that you are making?

Are you the kind of producer who can negotiate the complicated layers of film finance?

For the average Joe filmmaker, the wheeling and dealing of the multiple financing intricacies can be worlds away.  If you’re not sure what I’m talking about, powerhouse independent producer, Cassian Elwes, broke down the levels of financing for most independent films at the ScreenCraft Seminar.

For the most part, all that the average Joe filmmaker (you) wants to do is to have fun and make a movie with his or her buddies.  At least want to make your film with some local actors.  And maybe, just maybe, get discovered and be asked to make more films … and just like that your film career is off and running.  Ah, the dream of the independent auteur.

Anyone can write a novel and sell it online as an e-book.  If it’s good, maybe people will tell other people … if it sucks, then it won’t go far.  Music can be created on an iPad and be shared with millions around the world through sites like SoundCloud and the revised MySpace.  Again, if it sucks, no one is going to want to recommend it to their friends.  Of course, a good dose of marketing could help these efforts, but in the end the product has to have some merit.

Why is film any different than these other art forms in the digital age?

Perhaps, it’s for the simple reason that films can cost a lot more money and involve a lot more people in order to get it completed.  This is something that the sole author or sole musician doesn’t often have to commit to in order to make their art.  Perhaps.  But perhaps in this digital revolution, the new wave of filmmaking is that the lone artist can make films on his or her own.  And after they are done making their film, they can distribute it themselves through various digital distribution formats.

If you’re not sure what digital distribution platforms to choose from, Micah Van Hove wrote an incredible analysis over at NoFilmSchool.com

Can a film be made as inexpensively as a novel?  A song?

If you follow the advice from experts, majority of the time you’ll need a lot of capital and a lot of help to make your indie film .  Crowd funding seems to be the solution for many regular independent “Joe” filmmakers.  But what do you do once your film is finished?  Do you dream of a successful film festival run?  Then a distribution company coming in and giving you loads of money for your film and then getting more money to make more movies?  Will you be invited to all the cool parties with the stars?  Will you be offered the latest big budget studio film?

Maybe.  Some of done this.  And it’s these individuals that continue to fuel the dream for all of us.

The metrics are off.  Too much supply.  Not enough demand.  You have no leverage to negotiate any more on your advance.

In a business perspective, you just lost all of your investment capital.  Failure.  But in the film world, you may be viewed as a success … as long as you can secure any type of reputable distribution.  Strange world, eh?

So, what are you left with if you “Do the Opposite”?

Still uncertain of how any of this can be done?  I recently made a feature film called The Cube, which was made for $500 with no crew.  Yep, no crew.  I just plopped the camera up on a tripod and hit the record button.  You can check it out at:  www.thecubemovie.com

Even better, if you want to know how I plan to launch The Cube to the market, grab yourself a FREE GEAR GUIDE on all the equipment that I used to make a feature film with no crew.

I’m not an internet marketing or business guru.  I’m just some dude who has worked in production for nearly 20 years, who made a feature film in the most unlikely manner and will apply techniques used by successful online entrepreneurs for my film.  Will it work?  Who knows … but there are no rules in this new digital age, so what the hell, right?

I’d love for you to leave a comment.  I think this idea is worth discussing and would love to hear other takes on this idea.