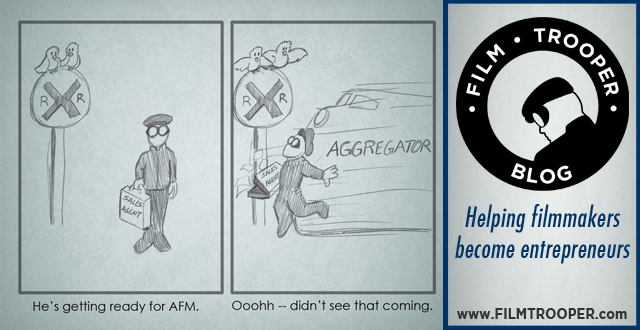 So, is it true? Did a sales agent die?

I don't mean literally died, like in a fantastical tale of murder or something, but is the position of the film sales agent dying?

Several years ago, I almost had an independent film greenlit.  The cast was in place, the reaction was strong, and the market was ready ... then the financial collapse happened and no one in the industry knew what to do or what would happen.

I remember having an option of attending the Screenwriter's Expo, or waiting and using my limited funds to attend the American Film Market (AFM).

I always felt that by going to the Screenwriter's Expo, I would be starting at the beginning -- trying to peddle my project to one of the various gate keepers that decided my fate.

So, why not skip that step and go directly to the market?

I would get to see first hand what the real buyers were buying.

If anyone who has not attended a film market, it's an eye opening affair.  There I was peddling my project alongside producers who had a finish film starring Dustin Hoffman. Seriously?  I had an American comedy that I was peddling.  I was told by many sales agents that American comedies don't play well overseas.  Comic actors like Will Ferrell and Steve Carell don't have a strong market presence in foreign territories.  Do you know who the biggest comedic star is in the world at that time was?  Rowan Atikson.  Yes, of Mr. Bean and Johnny English fame.  He's famous worldwide, because he does mostly silent physical comedy.  That translates well in any language.

When I attended the opening symposium, where Jonathan Wolf, President of the Independent Film & Television Alliance (IFTA), who ran the AFM, said point blank, "Don't premiere your film at a film festival".

Needless to say there was grumbling in the audience.

Jonathan Wolf was simply saying that film festivals are cultural events for communities.  By premiering your film before the market, it lessens the value.  Now there can be arguments that a solid run at several festivals with awards being presented could be a good thing, but seriously, how many films have you seen with the laurel leaves symbol on them, stating that they won this award or that award -- but when you look closer, it's from a festival you never heard of before.  So, it sort of cheapens the film product, right?

The whole experience caused me to look at films from a strictly business perspective.  Duh.

Isn't that the goal for most independent filmmakers?  To find a way to make their films and make a living from it.  And I'm not talking about getting rich, but just having a comfortable living to do their work.  Haha.  But alas, that's what everyone desires, right?  Isn't that the ultimate American Dream?  To make a comfortable living doing what you love to do. Could this be done?  And how?

The whole industry has been in a upheaval for years and from a business perspective it is one of the most foolish professions to get into ... but then again, if you look closely, any industry has its risks.  Opening a restaurant, getting into real estate investing, etc.- they all have their risks.  No, there has to be a way!

From my perspective, majority of the sales agents, acquisition directors, and the gate keepers to the distribution companies ... they were all kind of like used car salesmen.   But that's not the case for all of them.  I did meet a lovely woman who was an acquisition person for a distribution company in Singapore.  Tragically, she would pass away soon after we had met at AFM.  Sad, I know.  Tragedies like these put a human face on what can feel like an industry of phoniness at times.

Anyway, back to the lighter side of the blog.  So, there they were, all these sales agents and acquisitions people; they could have been selling and brokering anything, but it just so happened to be films.  When I took a step back and got out of the bubble, I wanted to see how this all looks from the perspective of basic business—especially how online businesses worked (after all, we knew that's where everything would end up). I had to simplify what I was seeing.

2. Your goods or service must provide a solution to a customer's problem (Providing a post production service was easy, because there were customers who had a production problem that needed to be filled.  But what sort of problem does a single feature film provide?  Is it just simple entertainment or escapism?)

3. Your customer must be aware that your good or service exists for them to pursue (This is why marketing and sales goes hand-in-hand with business basics)

4. Your customer must be able to acquire your good or service through some sort of distribution process (If you're providing a service, your referral network might become your distribution of service, but if you have a film product, then you need shelf space to distribute it ... Haha, that was the old brick and mortar ways of business. The internet has changed all that, right?)

So, there you go ... the basic rules of business.  Have a good/service (supply), have customers who want your good/service (demand), make them aware of your good/service (sales & marketing), and have a means to get it to them (distribution).  Now if you can plug your film into those rules, how would the ever changing landscape of the internet play into all of this?

It wasn't too long ago that the biggest barrier for filmmakers was access and means to make a movie.  With the latest digital tools, that is no longer a barrier.  Hell, I made a feature film for $500 with no crew!  If you want to see if it sucks or not, here's the link:  www.thecubemovie.com.

Anyway, the next barrier was the ability to sell and distribute your film.

Now, we know that iTunes, Netflix, Hulu, and now Vimeo On Demand offer a method for audiences to find and buy film products.   Sheri Candler, Independent Film Marketer, asked a question on Twitter, "If physical media no longer exists, what will distributors distribute?" (I couldn't remember the exact wording, but that was the gist of it) So, do indie filmmakers still need distribution companies?

And that brings me back to my original post's title: Death of a sales agent.

When I contacted Distribber*, an online aggregator that provides a service to filmmakers who want to get their films onto iTunes, Netflix, Hulu, etc. -- I asked, "If indie filmmakers can go to these digital media outlets directly, what will happen to the middle man?  What will be the role of sales agents?" Distribber's response?  "Things were changing and changing fast."

Death of a sales agent. A rewrite of Tennessee Williams' play may be in order.

What do you think?  What will the role of the film sales agent be if there is no physical product to distribute?  Leave a comment below.

Don't go away empty handed ... grab yourself a FREE GEAR GUIDE on all the equipment that I used to make a feature film with no crew.