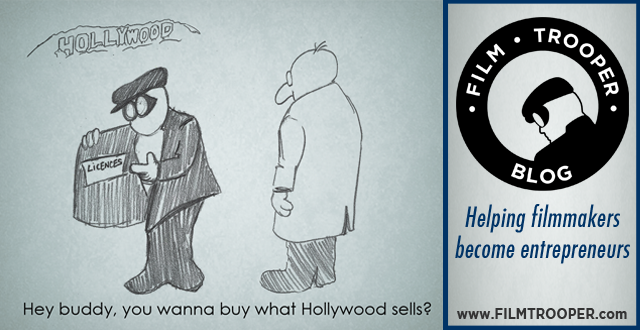 What business do you think Hollywood is in?

They are in the business of LICENSE EXPLOITATION.

This is a paraphrase from the book by Schuyler M. Moore entitled, The Biz.  Moore is one of the most respected entertainment lawyers in Hollywood and he cuts through the glitz and glamour of what he sees on a daily basis to view the industry through the lens of a business person and a legal expert.  He clarifies that, “The monetary value of a film lies in the ability to exploit it.” He goes on to explain, “The film industry revolves around copyright, because almost every film-company asset relates to the ownership or exploitation of copyrights.”

If we step back and think about what all this means … it means that what we perceive as the film business, is not films. It is indeed all about who controls the ownership of any given property to exploit the endless licensing and profitability of that property.

It makes sense … doesn’t it?

It’s no wonder that the major movie studios are pumping out a handful of spectacle movies every year.  They have ownership of a property that they can be exploited in various formats.  The film is only a small part of that plan.  In many ways, the film serves as the greatest advertisement for all the ancillary products that can be exploited by that ownership.

It’s no doubt that George Lucas opened the eyes of the industry when he built an empire off the exploitation of all the ancillary merchandising that came from all the properties he owned, Star Wars and Indiana Jones.  Genius!

Imagine if you were the sole creator of Apple’s Cube.  This was a stand alone computer in the shape of a cube.  It didn’t quite take the market place by storm.  Now Apple could weather the storm, as it had other products to make a connection with their customers, but if you were tied solely to the Cube, well you might be out of luck.

Speaking of Steve jobs and George Lucas.  Jobs bought Pixar from Lucas.  After Pixar accomplished what they had set out to do, which was to make the first completely 3D animated feature film with Toy Story, it was Steve Jobs that looked at the business model of Pixar and said, “This isn’t going to work”.

Steve Jobs forced Pixar into becoming a publicly traded studio.  He knew that they would need a strong surplus of cash in order to thrive.

So, what does this all mean to the independent filmmaker today?

Well, the barriers of making a film have been smashed …

So, that leaves one burning question …

How can you make a sustainable living making your art?

Perhaps the answer lies in exactly what Hollywood has been doing for years … exploiting licenses.

Lance Weiler, of WorkBook Project and champion of the transmedia movement for independent artist has been saying this for years.  Filmmakers, artists, musicians, all need to start expanding their work in various forms.  In the end, it may be coined as transmedia, but in Hollywood they’ve been doing it for years and it’s called license exploitation.

So, why not us?  Why can’t we build our own film studios and exploit our own work in the same manner as the studio system?  Of course, more money allows for greater production value and greater market place awareness, but if we as independent filmmakers can go small, or as Sheri Candler, Independent Film & Marketing Specialist tweeted me saying, “Indie films are intimate, handmade and less processed, so we should play that up.  If the filmmaker cares, then the audience will care more.” We can start small and stay intimate, but we can also start laying the foundation of a process that provides sustainability and that will be to exploit our own work.

I’d love to hear from others on this notion.  I’m not necessarily an expert on anything.  I made a feature film for $500 with no crew (THE CUBE), and now I’m trying to apply all of this stuff I’ve been learning to do just that … make a sustainable living making my crap …

Leave a comment below.  How can you exploit your own license?

Don’t go away empty handed … grab yourself a FREE GEAR GUIDE on all the equipment that I used to make a feature film with no crew.