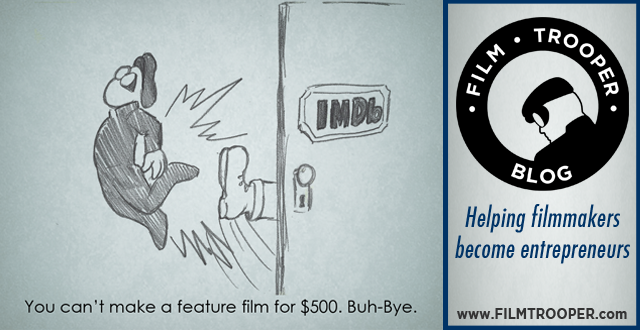 So, your film isn’t a real thing unless it’s listed on IMDB, right? Haha. Many people in the film business rely on IMDB as a major tool to justify their worth in the business. How many times have you checked IMDB before you were going to meet with someone to see if they were legit or not?  IMDB helps you size other people up.  However, there is a lot of misinformation on IMDB, and for anyone who has ever needed to add or update their profile on IMDB, you’ll know that it is a rigorous process to get your shat up there. To IMDB’s credit, they have done their best to maximize and organize all the data coming into their site by creating a thorough verification system to kick out impostors … like me 🙂 During the process of entering the data for my film The Cube, which is a full length feature film that was made for $500 with no crew. Yes, it was made for that little and I had no crew. If you want to know more about the movie, you can click on over to www.thecubemovie.com.

Anyway, when IMDB needed to know the budget for the film, I entered the amount of $500 and IMDB kicked off an automatic response, “Are you sure? This is quite low for a feature film.” BOOM!  They kicked me out.  Hee Hee.  Actually, IMDB has a 3-4 step process for each segment of information they need from you to verify that you’re not full of poop. So, after committing several hours of my life to adding in, then deleting, then re-adding in my information, I submitted my update to my profile and waited.  I think they’ll do anything you want as long as you pony up for the Pro account.  I checked back in after a week and there she was … my update for my first feature film.  You should always remember your first time, and well this was mine.  Do you remember yours?  Or are you waiting to have that moment happen yet?

As I was inputting the data for my film, I couldn’t help but wonder how IMDB had crafted their questions to fit into the old standard business paradigm.  For example, it appeared that IMDB required that every feature film must have a distribution company associated with the film in order to be legitimate.  The thought that you could release a film straight to a Video On Demand (VOD) platform like Vimeo On Demand or iTunes just didn’t fit into the automatic questionnaire.  Now, it’s not that they don’t have an option to handle these untraditional methods, IMDB does … it just falls into the “other” sections.  “Other” as in, “whatchoo talkin bout?”

Since this is The Film Trooper Blog, where we want to help independent filmmakers become entrepreneurs, visualizing how IMDB might encapsulate your career could be a great start.  I’ve heard a lot of entrepreneurs talk about changing your mindset as the most important step in pushing yourself toward success.  So, visualizing what you want your life to look like and how you want your obituary to read like is vital to shifting that mindset.  It’s almost like working backwards.  Let’s imagine … you’ve died.  Someone checks out your IMDB page to see what you worked on.  This is what usually happens when you are dead.  IMDB is the first stop.  So, what would you want your page to look like?

So, now that you have a vision of death.  I mean, you have a vision for your life and career (maybe family is in there, but I don’t know how narcissistic you are … as for me, I know how deep my narcissism goes).  Anyway, where do you start in order to fulfill this vision of your life?  You see the big picture, you see all the wonderful projects you’ve created, all the amazing people you’ve worked with, but now what?  Where do you start?  How do you start to fulfill this vision?

One of my favorite quotes comes from Walt Disney, when he said, “I only hope that we don’t lose sight of one thing – that it was all started by a mouse.”

What is your mouse?  I suppose for me it starts with a Cube.

Leave a comment and let’s chat.  If you’re gonna be cruel then be warned that I cry easily.