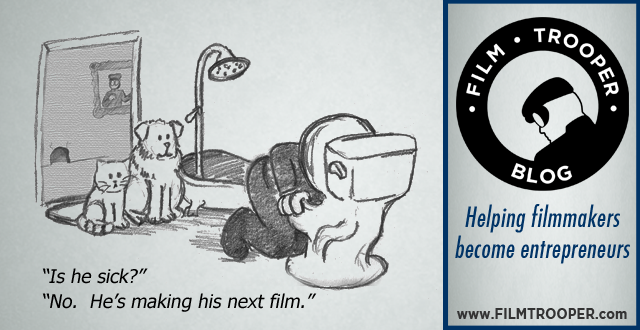 JUST BARF IT OUT

That’s the normal advice they experts give screenwriters when they’re staring at a blank page.  The whole act of brainstorming and getting whatever is on your mind out onto paper (real or electronic) is a helpful process of getting onto … well, the real writing.  It’s much easier to edit something once it becomes tangible rather than to create something out of thin air.

Eric Ries, author of THE LEAN STARTUP, has been leading a new movement for entrepreneurs of all sorts to apply the theory and practice of creating the Minimum Viable Product (MVP).

WHAT IS THE MVP?

The basic concept is that startup companies need to release a very stripped down and basic functioning version of their product to enter into the BUILD-MEASURE-LEARN cycle.  Instead of a startup spending globs of money developing a product nobody needs or is willing to pay for, they are encouraged to build something basic in order to get customer feedback as soon as possible.   This customer feedback will help shape the product into something that will become valuable and sellable in the marketplace.  This is very much like a screenwriter needing to edit draft after draft, stripping away sections of the story that aren’t required in order to finalize the strongest possible story.

Here is the official description of how the MVP fits into the whole process of building a successful startup business.  From Eric Ries himself:

“A core component of Lean Startup methodology is the build-measure-learn feedback loop. The first step is figuring out the problem that needs to be solved and then developing a minimum viable product (MVP) to begin the process of learning as quickly as possible. Once the MVP is established, a startup can work on tuning the engine. This will involve measurement and learning and must include actionable metrics that can demonstrate cause and effect question.” 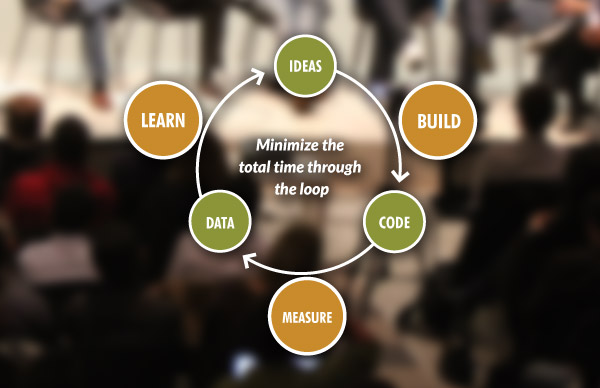 WHAT IS A FILM MVP?

It’s been said that every film that is produced follows the same pattern of a product launch, or a startup company.  The difference is that many tech startups and commodity startups have the ability to earn sustainable income.  A film product has become somewhat of a one-off product.  It has a finite shelf life.  Yes, there are film products that have managed to enter the realm of being timeless, earning profits for years to come, but majority of film products last for a only a whimper.

It could be said, that the script writing phase is the MVP.  So many iterations of the script must be written and rewritten before money is put behind it …  The only difference, these scripts aren’t usually tested to a paying audience base, they are greenlit by a few executives who take a calculated chance at striking gold.

BARFING OUT A FILM MVP

Since the principles of the Lean Startup is to get the product into the Build-Measure-Learn process, I simplified this MVP concept by just making a feature film for practically nothing.  I barfed out a film product, just as you would barf out the first draft of a script.

Did I do any audience testing of the idea prior to making it?  No.  Because, here’s the kicker — sometimes as artists, you just get a creative itch to make something.  Most marketers and business people will scoff at this, as there is no proper marketing strategy to earn your money back.  Now, if this were a $500,000 picture, sure that might be foolish, but when you keep your development costs down to nearly $0 — then who cares?

The benefit of keeping the costs of development and production so low, is that you have greater creative freedom to release that inner expression as an artist without  sacrificing other people’s money or your own money.  You’ll just be barfing out a film product.

WHAT ABOUT CROWD FUNDING AS THE MVP?

The evolution of the crowd funding phenomenon to serve as testing ground for your Film MVP is quite impressive.  The concept is simple.

So did I do this?  No.  I’m not that smart.  Actually, I figured if I couldn’t spend $500 of my own money on my project then that’s sad.  Also, there’s something about how much excitement can be generated by a film product prior it to being made.  Your film almost has more value before it’s ever made.  Once it’s made, it can be a letdown.

No, I opted to quietly see if I could even pull off a feature film made with no crew first before I started to bother other people about it.  Bad business?   Maybe.  But it was just a preference I chose and now I’m stuck with it.

WHAT TO DO WITH YOUR MVP FILM PRODUCT?

Once your MVP film product is completed, you can test it out on different audiences.  Again, this is considered the ass-backwards way of doing this, as a good business rule you should have a good idea of who the paying audience will be in order to profit from their willingness to … well, pay.

But let’s keep this in mind.  Steve Jobs is famous for saying that customers don’t know what they want.  He was a visionary.  Shouldn’t filmmakers be visionaries?  If you’re keeping your film product inexpensive, and you’re a true independent, your responsibility is to offer audiences a unique look at things that they cannot find within the mainstream.

Haha.  The thought that I’m even in the same breath of a visionary person like Jobs … is laughable.

I call it a supernatural suspense movie.  It’s available on Vimeo On Demand.  So, if it were added to a genre on iTunes or Netflix, I suppose  the only option would be to add it to the THRILLER section.  Audiences would be somewhat mislead, as it doesn’t follow the traditional structure of the thriller genre.  It may look to have a tinge of horror to it, but that would be misleading as well.  I think the reactions from the Portland premiere sum it up best:

I’m using the feedback from the premiere to discover my potential niche audience.  A lot of the feedback has been slanted towards the spiritual, especially Buddhism.  I’m building a marketing campaign that will attempt to engage this niche audience to take interest in my film.  Here is the latest video marketing content that was created in order to appeal to this niche.

I have no marketing analysis reports to tell me if this hunch will pay off, but remember, I didn’t spend much on the film to begin with and the marketing effort has been more sweat equity (social media energy) than anything else.

I’ll do a follow up case study to reveal if this marketing effort was successful or not.

In the meantime, don’t go away empty handed.  If you’d like a free resource guide of all the equipment that I used to make this feature film for $500 with no crew.  Click here to grab it!