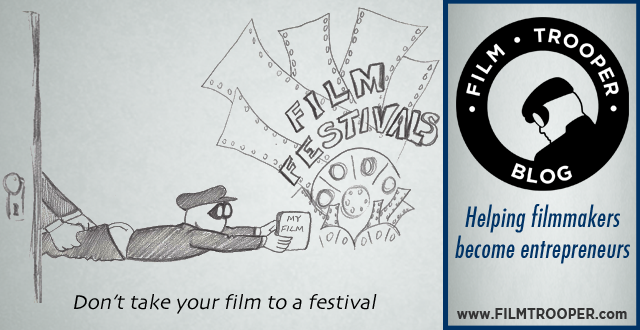 “Don’t take your film to a festival” That’s what Jonathan Wolf, Executive VP of the Independent Film & Television Alliance (IFTA), announced to us at the American Film Market (AFM) a few years back. His rationale was simply that you might devalue your film if you open your film to a festival that creates no valuable leverage for market demand. However, if you are to create the demand at one of the worldwide markets and not at a festival, then you reserve the value of your film for real sales deal.

It could be said that your film during it’s crowd funding stage is more valuable than it is when it is made. Think about it. How many Kickstarter or IndieGoGo crowd funding campaigns have reached their goal with great monetary success, but once that film is made, it doesn’t nearly have the same excitement or monetary return as it did when it just a promise. A promise that it could be great.  People are willing to pay for the “hopes” that something will be great.

Back to Mr. Wolf. He was simply explaining that a festival is nothing more than a cultural event. And it should be treated as such.

Now, there has been new strategies of how to use the film festivals as the initial marketing push for your film instead of the foolish notion that a major studio will swoop in and buy your film for millions of dollars and offer you even more millions to make your next great movie. That is the dream … and has always been the myth that dangled in front of filmmakers for years.

Ira Deutchman, who was one of the founders of Fine Line Features (My Own Private Idaho, The Player) and now Managing Partner of Emerging Pictures, recently spoke at the Toronto International Film Festival (TIFF) about what to do with your film now that you’re in the TIFF.  He does an eloquent job of laying out the realistic playing field of what an independent filmmaker is faced with once your film is made and accepted into a prominent film festival such as TIFF.  This video comes compliments of a tweet from Sheri Candler, Independent Film Marketing & Publicity expert.

Watch the YouTube link below to see what I mean … but keep in mind, I will follow up with why you may NOT want to enter your film into a festival.

WHY NOT TO ENTER YOUR FILM INTO A FESTIVAL

If you were able to make your film for pennies, I mean for as little as $500-$1,000.  If that is possible, then you would have a product that was made for very little money and it would set yourself up for a greater chance of return on that investment.  This is simply because your margins are low.  Imagine trying to recoup from a product that cost $500,000?

Film festival fees cost anywhere from $25-$75 per entry.  You’ll easily spend more than the cost of your movie on entry fees if indeed you only spent in the $500 range.  On top of that, you have no control if your product actually gets accepted into the festivals.  It could be a waste of money.  And if you DO get accepted, you still have to spend more money to do marketing at the festival to make sure more than 8 people come and see your film.

Now, if you can use the same money that would have gone into festival entry fees and take that to go into your marketing campaign for your film directly, then that might be a better use of funds.

In the entrepreneurial community there is a very influential book entitled, The Lean Startup by Eric Reiss.  In the book, Eric explains that entrepreneurs need to release a MVP, a minimum viable product.  The idea is simple enough.  Entrepreneurs need to have something to offer their customers in a specific niche that has minimal value in order to start a conversation about how future products can help solve these customers’ needs and problems.

Why can’t an indie film be approached the same way?

But your film must be made for very little in order to be declared as a minimum viable product (MVP).  Even better, if you can create a film that touches the emotional needs of a very specific niche audience … you’ll set yourself up for greater success.

Okay, so you have your little movie.  You won’t be sending it to film festivals.  You’ll take that money and effort and put it directly toward marketing to your niche audience.  Don’t cast a wide net.  Get very, very specific who that audience might be.

What to do now?

1. Identify your niche audience.  Get specific.

2. Reach out to the community leaders of that specific niche.  Ask them the best ways of reaching that audience with your film.

3. Always ask how your film might help and provide value to that specific niche audience.

4. Position your marketing of your film as an event gathering for that specific audience.  You need social community building within this niche group.   They will champion your film.  Creating an event for them will add value to their interests that they might not otherwise have the opportunity to engage in very often.

6. How much does this cost?  Just time … time building relationships with this specific audience.

Anyway, I’m applying this technique of taking my MVP film product and marketing it directly to a niche audience using the techniques used by so many successful online business entrepreneurs.  These entrepreneurs are making a successful living through their online businesses in all sorts of industries.  I’m simply viewing my film, not as a film, but as a unique valuable product for my niche customer base.

Perhaps you could think of your next project the same way?

I’m certain that I don’t have all the answers and even my opinion on this matter may be way off, but I’ve always loved the quote from Steve Jobs when he said, “There are no rules.”

I’d love to hear your comments on this idea … if you’re gonna be a mean troll, then just remember I cry easy.