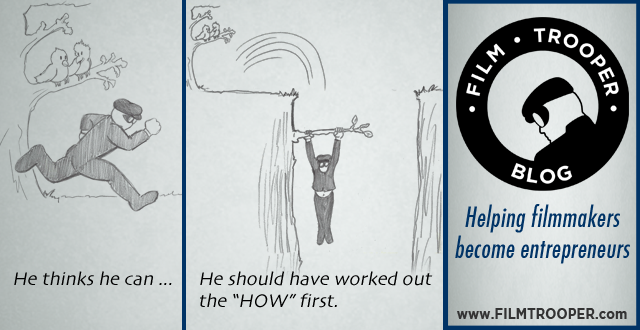 Could it be that simple?

Ask yourself this … Do you think you can become a filmmaker?

Do you think you can become an entrepreneur?

I’ve spent the past 20 years finally coming to a realization that I’m a filmmaker.  I went to film school, made several awful short films, but I made one that didn’t suck as bad as I thought.  Good enough to land me a job at Sony PlayStation, where I spent the next 12 years making cinematic movies for various PlayStation games.

I had all my eggs wrapped up in that one basket … that one big corporate basket.  So when the basket broke, it broke.  And it broke along with a lot of other baskets when the economy collapsed.

Let’s just say, that time in my life and for many others … well, it kinda sucked.  It was a definite wake up call.  You go to school, you’re work hard, do well, go to college, earn a degree, develop a professional skill, get a job, and repeat the process to earn promotions and then retire.  Haha.  Silly me.

We all learned that was not the case.

For all those who make the choice to work in the world of filmmaking … or any art for that matter, I commend you.  You have courage, and don’t let anyone else tell you differently.

The anxiety of not knowing when your next paying gig will be coming in, well it’s not for the faint of heart, that’s for sure.  But take comfort in knowing that this is how the world works now.  There is no security, and perhaps there never has been security.

SECURITY:  This is what an employee wants.

PREDICTABILITY:  This is what an entrepreneur wants.

We are inundated by media of all sorts.  There are roughly 50,000 new films made every year.  50,000!  How many films do you watch a year?  Then on top of the 50,000 there exists all the older film properties that are available to audiences year round with the advent of the Video On Demand (VOD) era.

Again, how many films do you watch in a year?  How many of those films are older films?  Older, as in last year older.

Now … do you still want to be a filmmaker?

The numbers are daunting, I agree, but it’s the reality.  Then again, if you like a challenge, then game on!

Although there are a ton of films being made every year, remember that audiences love the “new” and each person is unique. Can you offer audiences something that is unique … you’ll at least have the “new” on your side, but only if you don’t rehash what has been done before.

If you think you can, you’re right.

If you think you can become a filmmaker, then you’re right.

There are so many examples of what films look like, how to make films, and film commentary all around us.  So, mentally, it’s a bit easier to believe and think that you can become a filmmaker.

What about examples of entrepreneurs?

These examples are there if you look, but they aren’t as prominent in the general media, or at least not as sexy as the filmmaking industry has been in the previous years.  But this has changed, ever since the boom of internet technology startups and the young masterminds behind those companies.

“Just do your job.”  ~ Bill Belichick

A change in mindset can be as simple as “just doing your job.”

It’s much harder to make changes when we are left to our own devices and having no accountability.  But if we had mentors or coaches, they provide us with guidance and accountability.

Okay, we’re film people.  In every good story, there is a mentor type character that leads our hero through the first threshold of the adventure.  You are the hero of this story.  Who will be your mentor?  Okay, I accept your kind offer.  Hee hee.  I’m probably not the best mentor, but I can be the fool that you learn NOT what to do.

You know what’s better than a mentor in this situation if you really want to change your mindset?

What if I told you that you have a new job, but this new job you won’t get paid for a year.  But once you start making money, you will make money in your own business, from your own films and your own art for years to come?  And after this year, you’ll no longer have a boss … as you’ll become your own boss, in control of your destiny.

WELCOME TO YOUR NEW JOB!

Don’t worry, at this work place, you’ll be given training at every step.  We are all capable of doing any job if our boss gave us training along the way, right?

Now isn’t this a lot more realistic than asking you to change all by yourself?

Let’s get on with it.  Your new job is being a filmmaking entrepreneur.

Welcome to the Film Trooper Academy.  You have been hired to become a film entrepreneur.  Here is your job description.

RESOURCES – You will be required to make a feature film utilizing the resources and funds available to you.

ASK – The type of films that you will be required to produce will be dependent on identifying a “pain” of a specific audience.

SOLVE – You will be required to solve that audience’s “pain” through creative story telling.

EXPLOIT – You will be required to create an infrastructure that exploits the license of your film product in other media formats.

R-A-S-E-R.  This is not a real word, but it sort of sounds like RAZOR.  So be RASER sharp in your work ethic and you’ll do fine.

The first project for your brand new job is called: Mindset.

The simple change of one word, “HOW”?  This one word will change your life because your brain is forced to think of solutions to problems.  When you have the word “CAN’T” in your vocabulary, then your brain shifts to all the negative reasons why you will fail.

Task #1 of your new job.  How can I solve this problem?

STOP.  Ask yourself “how” can I make a feature film when you have no money?

Congratulations, you have completed the first task of your new job.  You have just asked yourself a simple question of HOW.

If you want to get a head start, grab yourself a FREE GEAR GUIDE on all the equipment I used to make a feature film with no crew.

Thanks for being a trooper … I mean, a Film Trooper, and reading along.